Etsy site is up! 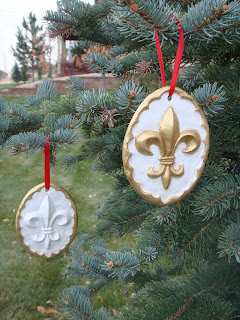 So 4 months later and my kiln situation is at a stand still! I was told that it would be hooked up before Thanksgiving break and alas, we head back tomorrow and still no power to the kiln. Lame. I have to say I'm pretty annoyed at it all. I understand school districts take a while but this is pushing ridiculous. Our "last day of wet clay" is rapidly approaching (ie. Thursday) and I'm still behind on bisque firings. I even went in several times over break and I doubt we'll be caught up by the end of the term.
With all the issues with our new kiln I decided to stop making my own work for the semester. It feels like a pretty crappy idea considering I really want to work. But with only having a tiny test kiln for 4 ceramics courses, it makes sense. Plus I can't make big pieces in a tiny kiln and I don't want my work collecting dust in the classroom or being a temptation for students to touch.
Of course I couldn't completely stop working! Instead, I decided to design a Christmas ornament and knit my butt off! I also started up an etsy site & recently posted my ornaments there for purchase! A portion of each ornament sale will be going to the Second Harvest Food Bank of Greater New Orleans.
Please feel free to check out my etsy site!
http://www.etsy.com/shop/CourtneyLyn7?ref=pr_shop_more
I hope to have baby blankets posted this week as well! With lots of pregnant friends I've become pretty speedy and figured why not try to put my hard work to use!
Posted by courtsclosed at 1:09 PM 2 comments: 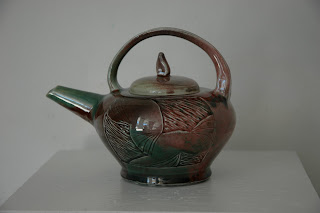 Well if you've been attempting to follow my blog you're probably pretty bummed. After my show in June I pretty much hit a wall of exhaustion. I decided not to make any new art over the summer & focus on gaining credits for work. I pretty much busted my butt all year and needed a little clay break.
Good news is that I'm headed back to work (school) and will be back in the studio. I increased my ceramics classes & gained a section for 1st semester. This is totally awesome but I'm terrified at the same time! Where are we going to store all this extra work!? Where will I store my work
!? I think I'm gonna go back to my rubbermaid damp boxes and cram more kids on shelves. Whatever. We'll deal. Plus we're getting a new kickass electric kiln in about a month. Which should be fun to collect work until we can fire it!
While you're waiting to see new work... here's some shots of the work I had in my solo show Littletinydots&BIGclaypots ! I'm not a great slide-taker and they turned out darker than expected. Nothing that a little photoshop probably couldn't fix though! Enjoy :-)
littletinydots&BIGclaypots
Posted by courtsclosed at 5:55 PM 1 comment: 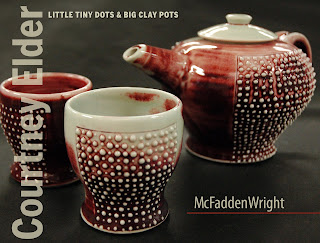 I'm currently firing a kiln as I post this. Yes, my *fingers crossed* last firing. Here's the front of my show card for the upcoming show next month. Opening is 1st Friday and there's still lots to do in under a week. Oh, plus it's my birthday. Now off to check the kiln. Check out the space-
http://www.mcfaddenwright.com/
Posted by courtsclosed at 7:11 PM No comments:

The past 6 crazy months! 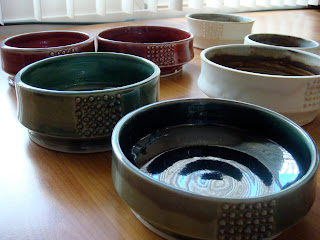 I really haven't dropped off the face of the earth, I've just been crazy busy.
Since November I've done a lot of traveling, both for work and pleasure and got so experience a lot of fun cities! Chicago, San Fan & New Orleans were just a few stops on my list! Oh, and I've made some more work. Here's some pics of some Christmas gifts I finished- last minute of course. Brie/dip dishes & a saki set for a friend's house warming! I've got several other good things to report-
1. Our gas kiln is now firing much more evenly!
2. My school was awarded $ to replace our craptastic electric kiln!
3. I got a "tiny dots" teapot set into our district faculty show this year!
4. I started making more big pots & have a show this June! (Obviously more to come in the next 2 weeks)
Other than work, finishing my work & getting ready for this show, that's about all I've been up to! I'm still looking into getting an Etsy site this summer, so any suggestions are appreciated!
2 more weeks with students, then it's smooth sailing! I'll post again (soon) about the show!
Posted by courtsclosed at 10:02 PM No comments: 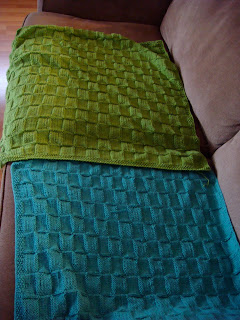 This week I said goodbye to 2 well-loved blankeys I made for a few expecting friends. (I tried to hold off on posting until I knew they were received, as not to spoil the surprise!) Green was for Phil & Nicole, teal for Mark & Jenn. General consensus at work is that the green one was the new favorite of all I have made. Personally I enjoyed making both & though they are the same pattern, they are slightly different. My students think I'm nuts for having that much patience but then again some of their attention spans are like a small puppy. The green blanket turned out larger than expected but not a problem! I love knitting... but I've got 2 more blankets to go before March and I need to figure out another pattern.
I also had to deal with one bitch of a kiln this past week. It made me feel frustrated, stupid, and incapable. I took many pictures and sent them to a college friend, Jared Ward who is trying to take a look at it for me. I did try a few things after talking to another friend whom formerly fired this kiln many times. I vacuumed out the whole thing and stacked the load more open in the bottom. Today I took another go at a cone 10 firing only to be disappointed. The kiln fired uneven again, surprise, with 10 flat on bottom & 9 bending on top. Yep. Fantastical. I refuse to attempt to fire my own work in this beast until it's even! Anytime I close the damper even a little there's SO MUCH reduction, like flames shooting out the kiln. Same thing happens with increasing the air. It hates me. Period. 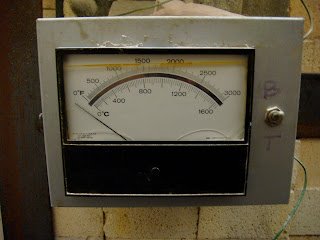 Pictured above is my crappy ass pyrometer that doesn't work even a bit. Guess I'll have to call in the professionals to check out this thing.
Posted by courtsclosed at 6:08 PM 6 comments:

I hate glazing. Okay well maybe not hate it, but I strongly strongly dislike glazing. I guess this mainly is because I like consistency & find that there can be many variables why glazes don't turn out exact. If I spend many hours on 1 piece, I don't want to glaze it and have it turn out like complete CRAP. I also miss soda firing a lot so that doesn't help. In order to solve this problem I've been mixing glaze tests over the past few
months and fired them last week... 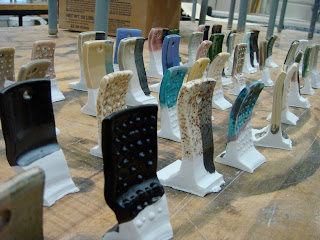 In the end I tested about 30 glazes. Some I picked out to replace some of our studio glazes at school, but most were for my purposes. Even with my ghetto kiln firing completely uneven (cone 7 on top & 10 on bottom) it yielded interesting results! I've pulled out a couple that I find particularly interesting & really like how they break over the textures I'm working with... 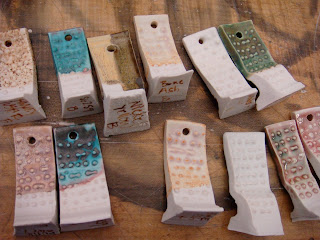 The goal is to build a body/pallet of glazes that really emphasize the detail on my work. I found one in particular that reminds me of soda firing & several that look great over black slip work. I will most likely continue to test more glazes since I'm not 100% on what I've got so far.
I shared the results with my Intermediate/Advanced Ceramics class & of course they picked out the most obnoxious colors (purple, green, blue, etc.) along with a few that I found interesting. They don't appreciate some of the finer details in some of the yellows/browns, etc. 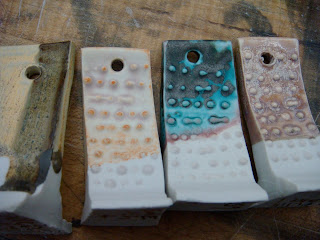 Feel free to let me know what you think! (hence part of the point of this blog in the first place)
*Note, I only dislike glazing when its unsuccessful! When it's frickin' sweet I love it!*
On a lighter note... on Sunday I did a test-run of my delicious apple pie! (a family recipe of course!) I hadn't made one since last Thanksgiving & I always like to try it out a few weeks before, just because. A few friends came over for popcorn, pie & Wii! I would post pics from our wii snowboarding, but those include LOTS of "white man overbite"-ing. lol. So here's the pie instead! 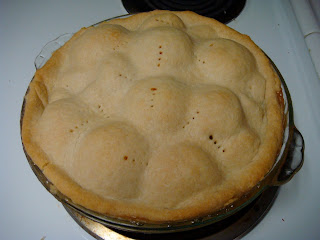 Long time, no posting. I guess I haven't updated because...
1. I was sick and missed like 2 weeks of making
2. I'm a sucker for superstition and haven't had any good pics of what I've accomplished.
3. ...super busy? Or at least lazy. You decide.
For the past month+ I've been attempting to keep track of my "studio" time. I felt pretty good about putting in 10-12 hrs/wk until I read someone's blog and realized they were putting in 30+, but they teach college & have their own studio space so whatever!
Anyway, the past few weeks I keep forgetting to record my daily hrs so it looks more like 6 or so. Which I feel is kind of lame. BUT I have accomplished several things lately...
- "NEW" big pot! (remake of the one that died)
- roughly 20 cups based on some sketches... not sure if they have the "sketchy" quality I wanted... 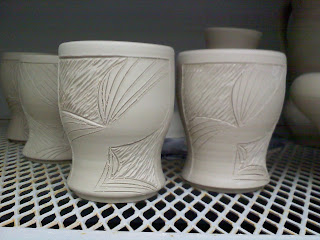 - currently working on 4 teapots (detailing now)
- about 20 glaze tests made, 20 more in the process.
I never realized how difficult it would be to make work after school and how hard it is to drag my butt in there on Saturdays... but it sucks. These teapots are a major time suck right
now because I've never worked with porcelain. So far they're pretty interesting. Not exactly what I sketched but pretty darn close.
What I should be working on in the next few weeks
- Firing our gas kiln so I can get these tiles tested!!
- Working with glaze results *fingers crossed*
- Making 3-4 more large pots.
As of now my tentative show is still set for Dec 1st. With 1 month to go I'm very concerned that I'm not going to cut it in time. This next week will be pretty hectic. If not much gets accomplished, the show will probably be postponed until sometime in the Spring. But then again, maybe it would be for the best? More work to choose from = better work to show! :-D
Posted by courtsclosed at 2:42 PM 3 comments: